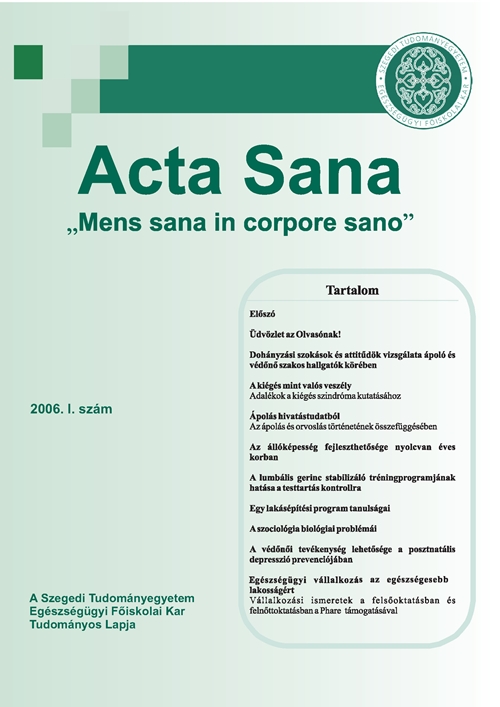 Summary : Introduction: Rapid movement of the arm or leg is associated with contraction of
the abdominal muscles prior to or shortly after the contraction of the muscles
responsible for the initiation of the limb movement. This anticipatory contraction
of the abdominal muscles is thought to contribute to preparatory stabilisation of the
spine against reactive forces resulting from the limb movement. The purpose of
this study was to investigate the effect of the arm swing and physical exercise on
the postural stability.
Method: Subjects: 16 healthy middle-aged (43.12 ± 2.14 years) voluntaries were
involved in the study. Static postural stability was measured during standing on a
force platform, and the effect of a rapid shoulder flexion on the sway parameters
(displacement of centre of mass) was determined in medio-lateral (ML) and anteroposterior
directions (AP). The subjects have taken part in a lumbar stabilisation program for 8 weeks. The posturographic measurements were performed before
and after the training program. The data were processed by analysis of variance.
Results: The absence of the visual control caused an increase in the body sway
during the quiet standing before but not after the training programme. The arm
movement caused a significant increase in the sway mainly in the anterior-posterior
direction. The lack of the visual control initiated a further increase of the maximal
amplitude in forward direction before the training. This significant difference has
vanished after the training.
Discussion: Our results suggest that physical training increased the postural
stability not only during quiet standing but also at dynamic perturbations, because
without visual control the subjects were more able to control the movement of their
centre of mass. Our findings can be explained by the improved somatosensory
inputs and/or the coordination among muscle.